Skip to content
Home/Trail Runs/Lud’s Church and the Dane : A 10km Trail Run in the Peak District

Lud’s Church and the Dane : A 10km Trail Run in the Peak District

The Ship Inn
The Wincle Brewery

Wincle is a beautiful little hamlet nestled in a valley on the banks of the river Dane. It boasts a marvellous public house called The Ship and an equally delicious brewery The Wincle Brewery. Wincle is the start of our adventure and is located on the border of South East Cheshire and Staffordshire in fact the river Dane forms the boundary between the counties.

The route comprises of a woodland river path, open fields, wooded climbs a dip into ancient history through Ludds Church, a strenuous climb up to Roach End at the eastern most point of the Roaches and a panoramic ridge to finish this stunning run. 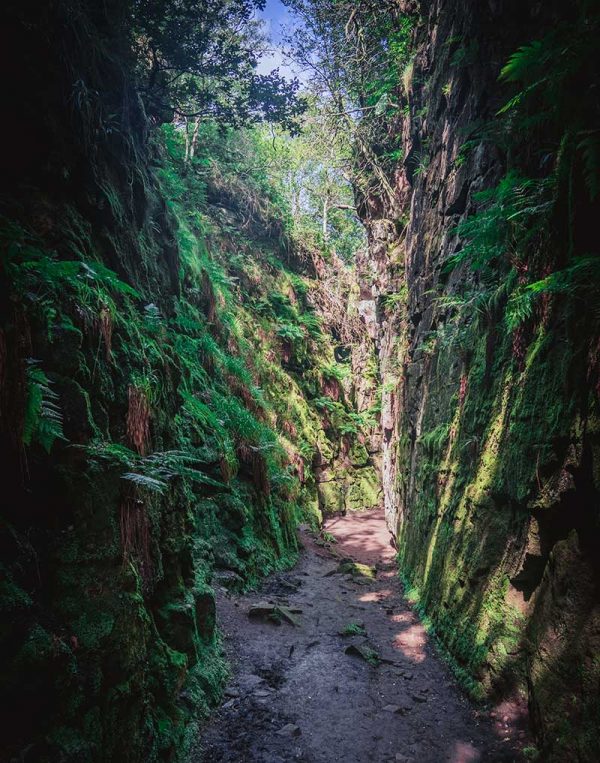 The astonishing Lud’s Church is a deep chasm created by a massive landslip in the rock.  Over 100 metres long and 18 metres deep the ravinie is mossy and overgrown, wet and cool even on the hottest of days.

Inside is dark, dank and mysterious, echoing of bygone days and secrets.  The walls are covered with dripping mosses, ferns and grasses.  You don’t need much imagination to picture Lud’s Church as a place of myths and mysteries.

The area has a place in Christian history: the Lollards, who were followers of John Wycliffe, an early church reformer, are supposed to have used this as a secret place of worship during the early 15th century, when they were being persecuted for their religious beliefs. However long before the arrival of the Lollards, it is likely that Lud’s Church would have been a place of pagan worship.

Sunlight really only penetrates to the depths of the chasm during the height of summer, and it is quite possible that it was the site of Midsummer ceremonies.

Whatever your beliefs, it remains that Lud’s Church is a fascinating place to explore, well worth the trip into the woods.